The many moods of the mediterranean 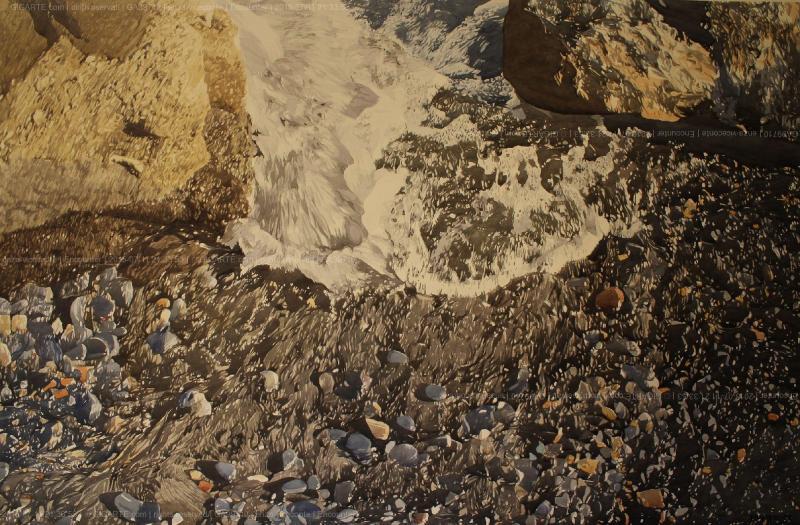 When you first encounter Enza
Viceconte’s watercolors, your initial
thought might be, I need to go on
vacation. And who would blame you? Her primary
influence is the sea, and her work is often
suffused specifically with the idyllic blues of
the Mediterranean Sea.
As a watercolorist, Viceconte finds water
to be essential to her work, and it also serves
as the subject and spiritual wellspring of her
creative output. She paints the sea in all its
moods: serene caves with mirror-still water,
cobble beaches with waves pouring forth, and
the raw power of 5- or 6-foot breakers slamming
onshore.
“I really love the sea, its rocks and its natural
light,” Viceconte says. “The silent and private
language I share with the sea has always been
a source of inspiration for me.” The artist
doesn’t have to travel far for that inspiration:
She lives in Tuscany, on the famed island of
Elba, which has been her home for years.Steeped in the Renaissance
Viceconte began her career as an engraver,
specializing in etching and aquatint, while also
painting with oils and acrylics. She only began
working with watercolors later, though she
quickly found herself at home in the medium
and has worked in it exclusively for more than
two decades.
The artist attributes a large part of her
success to her formal training. She studied at
an upper secondary school that specialized
in art, and she then attended the legendary
Accademia di Belle Arti di Firenze. An arts
powerhouse since 1563, it was founded by
Cosimo I de’ Medici—the Grand Duke of
Tuscany and a major patron of Renaissance art.
The school is associated with such luminaries
as Michelangelo (1475-1564). This sense of history
is never far away, as Michelangelo’s David
is located in a gallery just a block away.
Viceconte warmly recalls her time at the
academy as the “best period in my life.” She
was 18 years old, and attended courses in
the mornings and a teacher’s studio in the
afternoons. It was there that she learned the
painting techniques that have been passed
down at the academy since the Renaissance.
She especially appreciated the multidisciplinary
approach where she learned a wide
variety of methods and styles, from the secrets
of distemper to fresco painting.
Perhaps unsurprisingly given her academic
background and the art history of Florence Viceconte cites a number of Renaissance artists
as influences, and she has dedicated a good
deal of time to producing verisimilar copies
of Renaissance works to master chiaroscuro
and other Renaissance painting techniques.
Viceconte points to Albrecht Dürer (1471-1528),
in particular, as an inspiration. After five years
at the academy, Viceconte finished her studies
and then won a grant to study in Urbino, where
she studied xylography and engraving.
The Winds of Change
In the end, the siren song of watercolor pulled
Viceconte away from all other media and lured
her to the shore. “The places I paint represent
nature itself, but also the feelings and emotions
that connect me to them,” Viceconte says.
When she selects her subject, she pays close
attention to the weather, especially the prevailing
winds on Elba’s beaches. In fact, she often
chooses where to work based on the dominant
winds that blow there. She enjoys painting the
Mediterranean in part because of its mutability
and how a “quick change of the winds” can
transform a site entirely.
Viceconte’s attention to such meteorological
detail is important, as a scene can materialize
or disappear suddenly. Her familiarity with the
landscape and the winds helps her recognize
and capture details that other people may not
even notice.
It’s in the Details
When heading to a locale, the artist carries a
Winsor & Newton paint set in a godet. Once she
finds herself drawn to the colors around her and
has found the right atmosphere—she stresses
that she has to “feel” that the place is right—she
notes the colors present, taking photos with her
tablet computer, drawing a chiaroscuro sketch
in graphite (taking care to divide the space into
sections) and painting just the sea.
“The places I paint represent nature itself, but also
feelings and emotions that link me up with them.”
Bask in more of Enza Viceconte’s odes to the
sea at artistsnetwork.com/medium/watercolor/
enza-viceconte-watercolor-seascapes 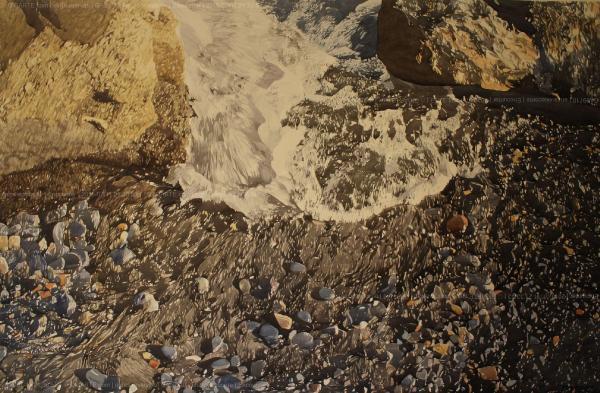